Turkey is not complete without the gravy, and the best gravy includes the turkey drippings! This gravy is full of flavor, drippings, and as smooth as velvet, making it the best in show for the holidays. Add this Best Slow Cooker Thanksgiving Stuffing and this Slow Cooker Green Bean Casserole to complete your Thanksgiving table.

How To Make Slow Cooker Turkey Gravy From Drippings Recipe From Scratch?

What To Serve With Best Slow Cooker Brown Gravy?

Gravy is the perfect compliment to this classic Slow Cooker Turkey Breast or other proteins such as Slow Cooker Shredded Chicken, meatloaf, or meatballs.

It also adds so much flavor and creaminess on top of Slow Cooker Baked Potatoes {In Foil}, Slow Cooker Mashed Potatoes , Slow Cooker Cornbread Stuffing Or Dressing, poutine, or even pasta that is a little too dry.

Onion gravy– Saute finely sliced onions, and then mix them into the gravy.

Mushroom gravy– Saute the mushrooms until the excess liquid is evaporated, and then mix them into the gravy.

Red wine gravy– Make the roux on saute mode. Then add the wine so that it can cook down and the alcohol can evaporate before adding the other ingredients and slow cooking.

Gravy without drippings– Simply omit the drippings and use all broth instead. Please note that it won’t be as flavorful.

Flour alternative– You can use arrowroot powder, gluten free flour, in place of flour to make a gluten free roux. You can also use cornstarch but the texture and flavor will be different.

Add herbs and spices– Such as parsley, basil, sage, rosemary, thyme, or paprika.

Vegetarian gravy– Use vegetable broth in place of chicken or turkey broth for a vegetarian option.

Make it spicy– Add crushed red pepper flakes or cayenne pepper for a spicy version of this gravy.

Make it creamy– Add heavy cream for a creamy version.

Add seasonings– Such as Mexican, Greek, or Cajun seasoning for a different flavor profile.

I did not use Giblets in this gravy, but you can include them if you like. Giblets are the liver, heart, gizzard, and neck of the turkey. You can finely chop the cooked giblets and add them to the gravy for more flavor and texture.

How To Thicken Gravy? How To Make Gravy Thinner?

To thicken the gravy, continue cooking on High heat (uncovered) for 5-10 minutes until it reduces more and thickens to your desired consistency. To thin the gravy, simply add a little more broth.

They are the juices and fat that accumulate in the bottom of the pan when meat is roasted, cooked, or fried.

Use low sodium broth and unsalted butter– This prevents the gravy from becoming too salty.

Why is my gravy grainy? How to fix it? If the flour is not cooked long enough and remains raw in the gravy it will be grainy. Make sure to add the flour in slowly and whisk it into the melted butter, and cook it for about 2 minutes to make sure it is no longer raw.

Why is my gravy lumpy? How to fix it? If the roux was not whisked the entire time or enough, or the flour was dumped in all at once instead of whisked into the roux, then the gravy may be grainy. Make sure to whisk the flour into the melted butter gradually to prevent this, and continue whisking the whole time until the roux is smooth.

Broth vs. Stock– Either can be used in this recipe. Broth is typically seasoned, and stock is generally used to add body and has more flavor. I prefer stock for the depth of flavor.

Alternative to using multi-functional slow cooker– Make the flour mixture in a nonstick saucepan or stovetop. The rest of the steps will be the same as the recipe suggest from that point on.

Can you make gravy with water? No, it will make the gravy tasteless, which is the opposite of what we are aiming for!

Refrigerate– In a sealed container for up to 2 days.

Freeze– In a freezer safe container or bag for up to 2 months.

Reheat– In the microwave or on the stovetop with a splash of water. 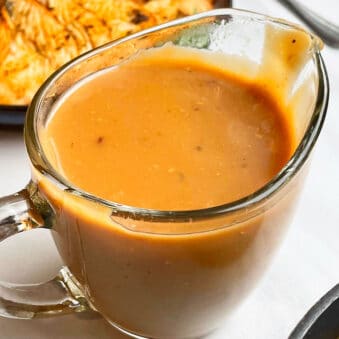 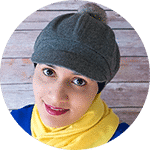